October 18 is Persons Day in Canada.

It marks the day in 1929 when the historic decision to include women in the legal definition of “persons” was handed down by Canada’s highest court of appeal. This gave some women the right to be appointed to the Senate of Canada and paved the way for women's increased participation in public and political life. Though this decision did not include all women, such as Indigenous women and women of Asian heritage and descent, it did mark critical progress in the advancement of gender equality in Canada.

The History of the Persons Case

In Canada, the British North America Act (BNA Act) of 1867 set out the powers and responsibilities of the provinces and of the federal government. The Act used the word “persons” when referring to more than one person and “he” when referring to one person. Many argued the Act implicitly stated that only a man could be a person, which prevented women from participating fully in politics or affairs of state.

Governments also used the “persons” argument to keep women out of important positions. If the word “person” applied only to men, then the stipulation that only “qualified persons” could be appointed to the Senate of Canada meant that only men could be appointed.

In 1927, five women who have since become known as the Famous Five launched a legal challenge that would mark a turning point for equality rights in Canada. Emily Murphy, Nellie McClung, Louise McKinney, Irene Parlby and Henrietta Muir Edwards were journalists, politicians, reformers and activists from Alberta who asked the Supreme Court of Canada to answer the following question: does the word “person” in Section 24 of the BNA Act include female persons? After five weeks of debate, the Supreme Court decided that the word “person” did not include women.

Although shocked by the Court’s decision, the Famous Five did not give up the fight and took their case to the Judicial Committee of the Privy Council of Great Britain in London, which was then Canada’s highest court of appeal.

“The exclusion of women from all public offices is a relic of days more barbarous than ours. And to those who would ask why the word ‘person’ should include females, the obvious answer is, why should it not?”

On Persons Day, we honour the bravery and determination of the Famous Five whose landmark case helped pave the way for women to participate equally in all aspects of life in Canada. We also honour all those whose work in the years since then has expanded and strengthened those rights.

Over the years, statues of the Famous Five have been erected in Canada, such as the one depicted on this year’s image that can be found in Winnipeg near the Manitoba Legislative Building. Different statues honouring these women can also be found in Calgary and Ottawa.

Use this banner for your web or Intranet content. 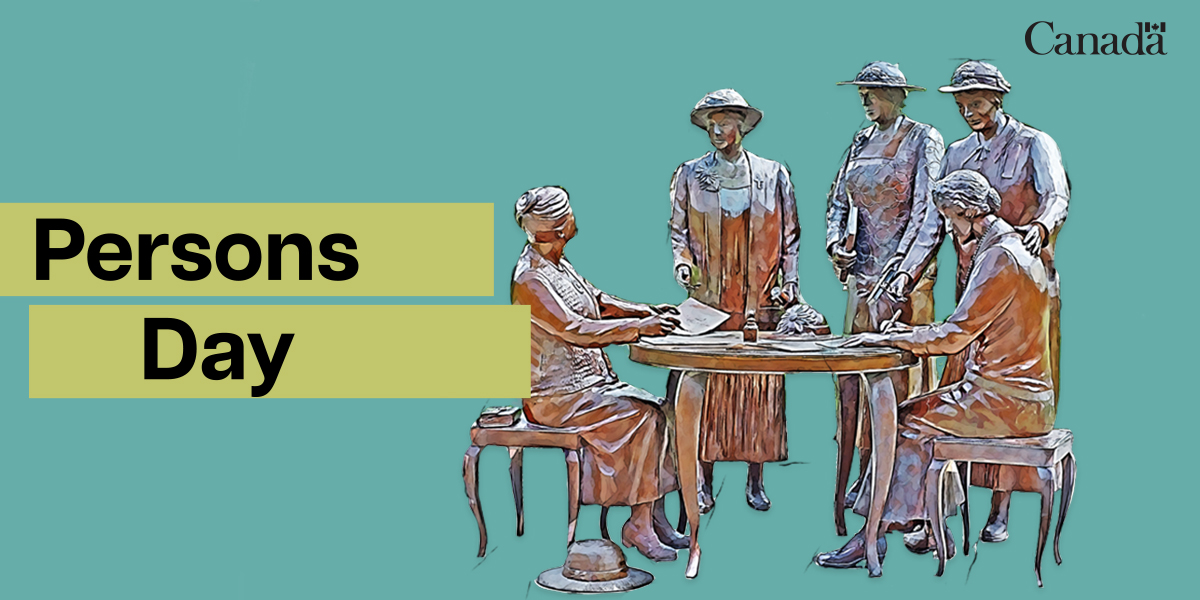